There’s a family of ducks that just came to live in a pond that I can see from my house. It’s actually a mother duck and her fourteen babies.

I love watching them.

After just a couple of days, the baby ducks started to grow. As they grew they became more and more adventurous. They wouldn’t stay in line any longer. They all started spreading out and exploring on their own a little.  Every day that went by they ventured out a little further.

Every once in a while something would scare the baby ducks.  Maybe it was a frog croaking or jumping or just the breeze moving some leaves near them on the shore.  When they did get scared, they would rush back to their mother where they again felt safe. But, they never had to run too far because the mother was always close by.

I laughed to myself as I watched because this happened over and over again.  The little ducks were very brave for a few minutes at a time.

But then it hit me: aren’t we just like those baby ducks?

What I mean is, we stray – we go out on our own and try to find our own way – quite possibly getting scared along the way. The difference between those baby ducks and us is that someday they leave their mother likely never to see her again.  The ducklings will move on and have no one to run to when they are scared.  But for us, even if we don’t have a parent around, we will always have God, our heavenly Father, to turn to.

Sometimes we move away from God and there might be times we even separate ourselves from Him.  But like a good father, He stays close to us while letting us venture out on our own, trying to find our own way. But He always stays near to us in case we get scared or get ourselves in trouble and need to come running back to Him.  He waits for us as patiently as that mother duck waited for her ducklings when they needed her.

The Bible tells us about Joshua.  Joshua had just lost his friend and counselor Moses.  Moses had always been with Joshua and I can only imagine that Joshua had come to lean on Moses in times when he might had been uncertain or fearful.  And, now that Moses was gone, it was left to Joshua to lead about two million people into a new and strange land.  God, possibly sensing Joshua’s apprehension, told Joshua: “Have I not commanded you? Be strong and courageous. Do not be terrified; do not be discouraged, for the LORD your God will be with you wherever you go.” (Joshua 1:9 NIV)

God told Joshua He was with him.  However, God is not just with Joshua.  God is with all of us all of the time, wherever we go.

When we are unsure or get scared, we can rely on His word when He tells us that He will be there with us.

Knowing that God is such a good and caring Father should make us want to stay close to Him all of the time and to not stray too far from Him even though He will be there when we come running back to Him. 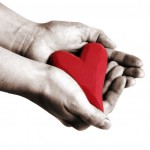